I grew up in London, England and I often pang with the desire to be back, mostly when there are cool ballet events happening in the city. Firstly, NATALIA OSIPOVA and Ivan Vasiliev, recently engaged to each other, are performing Ashton's Romeo and Juliet together in London. AMAZING. Read this article in the Daily Telegraph for details.

SECONDLY, Sylvie Guillem's new work entitled Sylvie Guillem: 6000 Miles Away is premiering. I cannot believe that this age-defying prima is still dancing such challenging pieces. Read this article about her in The Telegraph.

I have only seen Guillem dance once, when she was with the Royal. I had the insane fortune of seeing her and Darcey Bussell, my favourite dancer of all time, dancing together at the Rioyal Opera House a few years ago, but I've never seen Osipova. HOPEFULLY, this will change soon. The Bolshoi is coming to Canada next year to perform Don Quixote, Osipova's specialty, in Ottawa, and she BETTER be dancing Kitri, or I'll die.
Posted by balletomane at 7:03 PM 1 comment:

The Chicago Tribune has reported today that there could be a potential lockout for Joffrey Ballet dancers, after the company failed to reach an agreement on new contract terms with the American Guild of Musical Artists.

Executive director Christopher Clinton Conway sent a letter out on Friday to the Joffrey dancers informing them that the beginning of the 2011-2012 season will be cancelled, and that dancers would have to remove all possessions from the Joffrey Tower and turn in their building passes.

The Tribune article mentions that a proposed increase in the number of rehearsal hours to 30 from 25 per week may have contributed to the current impasse. Thoughts on this?

Hopefully the dancers can get back to work as soon as possible. The Joffrey is a world-class company, and it would be a terrible shame to see the company's new season cut.
Posted by balletomane at 10:58 AM 1 comment:

Email ThisBlogThis!Share to TwitterShare to FacebookShare to Pinterest
Labels: Joffrey Ballet of Chicago

No, there is no end to my obsession with this company. In fact, in February, I fell in love with them all over again. I'm so sorry that this news is so overdue but...

I performed as a super with the company in their Ottawa run of La Bayadère. It was an amazing, amazing experience. I cried on my way home from the theatre after the last peformance. I'll go into more detail about being backstage with the Mariinsky in a later post. For now, here are a couple of photographs from the week! 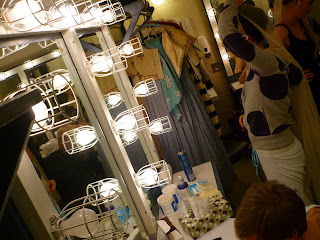 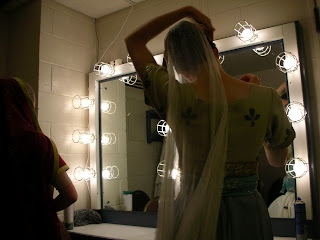 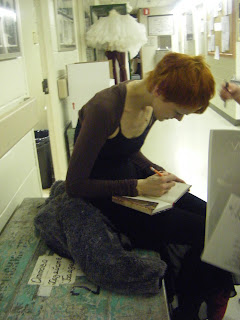 Ulyana Lopatkina signing autographs! She is so tall and stately and elegant. I utterly adored her, although Diana Vishneva was my favourite Nikiya by far. Diana was really, really nice, perhaps because she spoke more English than the rest of the dancers in the company (I did learn some basic Russian phrases in a vague attempt to be polite and respectful!!). I got a photograph with her and she signed me a massive autograph! I cried like an infant after meeting her: the whole thing was just so surreal.
I chatted for a bit with English-born dancer Xander Parish, formerly of the Royal Ballet, who came on tour more for his language capabilities than anything else, as he is currently suffering from bad tendonitis in both his knees (we bonded over our dreadful joints). He is an extremely accomplished dancer, and the first ever British hire to the Mariinsky Theatre. He mentioned to me that Alina Somova, still a relative debutante but one of my favourite dancers in the world right now, wasn't able to make it to North America because she dislocated her shoulder performing an en dedans turn in Swan Lake back in St. Petersburg.
So, to Alina (not that she would ever read my blog): I was so thrilled thinking I would have the chance to see you perform Swan Lake (Alina, at only 18, was one of the youngest dancers to ever tackle the roles of Odette/Odile in the history of the Mariinsky) here in Canada, and was absolutely devastated to learn of your injury. I wish you all the best, and hope you have a fast recovery.
Posted by balletomane at 7:50 PM 3 comments:

PROBLEM SOLVED. The Mariinsky is performing in Ottawa BEFORE they are performing in Toronto, and they are performing La Bayadère, which I have never seen in my life. So, I will be seeing them on opening night in Ottawa, and will exchange my Toronto Swan Lake ticket for one that's on the weekend so that I'll be able to make it. I am so thrilled. I talked to a friend who remembers when the Kirov came to Ottawa in 1989. Apparently, they're like an army trudging the streets with their massive orchestra, backstage crew and touring company. Many updates will ensue, I promise.
Posted by balletomane at 5:30 PM No comments:

Yes, I'm an idiot and decided to watch this campy film a while ago. I will not give the film the satisfaction of eliciting more than one word out of me, so here goes:

BARF
Posted by balletomane at 7:56 PM No comments:

My heart soars and breaks all at once while reading this article about Royal Ballet prima Tamara Rojo.
Posted by balletomane at 12:46 PM No comments:

'The Company' and Ballet Dancers in Pop Culture

I watched the film 'The Company' yesterday evening. The film has a quiet, "day in the life of" tone that is free of the usual, pop-culture-friendly, ballet stereotypes (we all know the awful, numbing stereotypes in which all the men are gay and all the women are anorexic). It also features some magnificent dancing by the incredible Joffrey Ballet of Chicago.

I'd seen the film a couple of times before, but there was one part that made me laugh out loud yesterday, and it wasn't Malcolm McDowell announcing, "practise safe sex, babies!" I have nothing negative to say about Neve Campbell, who stars in the film, because she is an actul ballet dancer who is incredibly gifted (she graduated from Canada's prestigious National Ballet School). She by far outshines other horrid portrayals of dancers such as Julia Stiles' performance in the film, 'Save the Last Dance' (that film makes me so angry). So the low point of the film was clearly due to a poor directorial choice.

The hilarity occurs when Neve Campbell's character returns home from a performance. She peels off a small plaster to reveal (gasp!) a blister on her big toe joint! She then proceeds to massage her obviously terribly sore, aching feet. THE PERFORMANCE WAS IN SOFT SHOES. IT WASN'T EVEN ON POINTE. Her feet look perfectly fine except for that one blister which we, the audience, are clearly supposed to cry in sympathetic shock over. God, I laughed so hard. My mother's feet look worse than that after walking in high heels for an hour.

How insulting that a film otherwise so realistic and unpretentious should expect me to fawn over the dancer who, after performing a dance in soft shoes, has one bloody blister (pun intended) on her foot. Please, my feet are missing toenails! If my little sister, who's a rower, had been with me, she would have laughed at least equally as hard. Her palms are as rubbed raw as my toes. I would have had to fight to retain her respect for ballet dancers. To all artists who wish to portray the difficult lives of ballerinas: we do not show you our feet because you do not want to see them. Please save us from disgust at your wimpy attempts at portraying the hardship of our toes.

In other news, 'The Black Swan' starring Natalie Portman and Mila Kunis is being released in cinemas soon. I suppose I shall have to see it, because it's a ballet movie, but also because I love Natalie Portman. I have heard, however, that the film is rich with those dreaded ballet stereotypes and that, while her attempt is commendable, Natalie Portman's dancing makes it very hard to really believe that her character is a prima with NYCB. Oh, disappointment...
Posted by balletomane at 11:25 AM No comments: 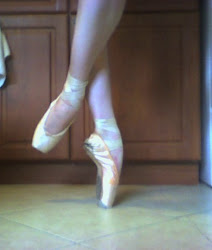